Hi!
I mentioned on Facebook a few days ago I’ve been working on refashioning a pair of my shoes, and they’re done now so I’m going to share them with you!

I love these shoes. They’re just inexpensive, cloth shoes that are made kinda in the TOMS style but without the price tag. I think TOMS are really cool; and the mission behind them (giving a pair of shoes to someone who needs them for ever pair that is bought) is awesome but I don’t have fifty bucks to drop on a pair of shoes.

Anyway, as any cloth shoes do, they were bound to wear out.
I seem to have a pointy big toe and wear out all of my socks in the toe first, and that’s what happened to these sad suckers as well. (is this just me, or does everyone’s toes do this?)

I’ve actually been meaning to fix them for a while, but just hadn’t gotten around to it….
then one day I decided: that was the day I’d start fixing my shoes!

I have some fabric that is kind of water-proof feeling…not completely, but it’s one of those fabrics you’d make an outdoor tablecloth or something out of.
I just put my shoes on the fabric and cut around the toe and the heel and then had to cut another set of toes and heels out because the first ones were too small when I tried to fold the edges under.
(so maybe you should measure??) 😉 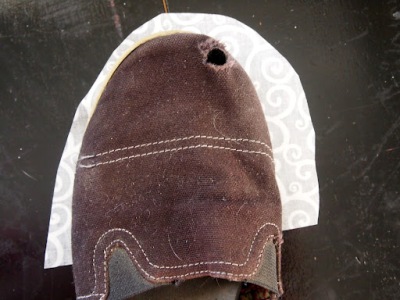 This is a project you can do even if you DON”T have a sewing machine, because these babies were sewn entirely by hand. It didn’t take too long either, about an hour a shoe and that’s with refereeing kids and fetching snacks every 10 minutes or so.

I got some black thread and my scissors out and just started sewing, folding a tiny bit of edge under as I went for a nice finished look.

I decided to sew fabric around the sole inserts too since it had worn off about two weeks after I bought the shoes. (I never said they weren’t cheap…)  and I did use my sewing machine for that, but you could do it by hand as well. I just folded the fabric around the foam insert and then sewed around it and cut off the excess fabric. 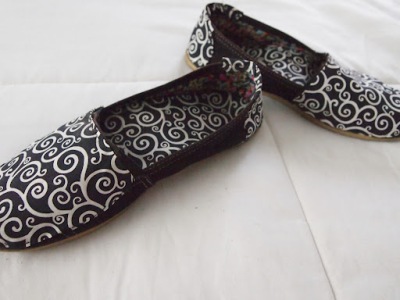 I really like the way they turned out, although I wish I”d have thought about making them less cool and artsy and more ‘match with everything-y’. Oh, well.
I have a few more months at least before the rainy fall/winter season so I’ll enjoy my artsy $11 Refashioned shoes from Ross until then…when they’ll probably wear out just in time for boot season. 🙂

Frye Melissa Button Boots in Cognac Vintage….they are just so pretty.
So are virtually any other boots by Frye. I stumbled across them last spring and still think they’re beautiful.
A girl can dream, right? 😉

2 thoughts on “Refashion:"New" Shoes For The Price Of Nothing”